Using Metal Detectors To Screen Riders On Roller Coasters: Why It’s Good & How It Will Keep You Safer At Theme Parks Have you heard the news that Universal Resort in Orlando, Florida has installed metal detectors in the queues of 3 famous roller coasters?

That’s right, you now have to pass through a metal detector before you can ride Hollywood Rip Ride Rockit, Dragon Challenge, and The Incredible Hulk at Universal Orlando and Islands of Adventure.

This controversial move has really created a division in the roller coaster enthusiast community. Some roller coaster riders are glad the move has been made, while others are less than thrilled about emptying their pockets before boarding coasters.

Why is Universal Orlando installing metal detectors on some of its rides? What are roller coaster riders upset about? Are more metal detectors to come at Universal, possibly other Florida theme parks and amusement parks around the United States?

This is a story I’ve been watching unfold for some time now.

I’m a stakeholder in this issue for at least 2 reasons:

Why Did Universal Orlando Install Metal Detectors On Coasters?

Perhaps I should address this issue first – why exactly were metal detectors seen as necessary additions at some Universal roller coasters?

Both incidents were caused by loose objects flying from riders on the roller coaster. One of the incidents resulted in a serious injury, causing one rider to lose his eye.

Apparently, a guest riding Dragon Challenge was throwing pocket change during toward the other roller coaster train. Soon, copycats were doing the same. 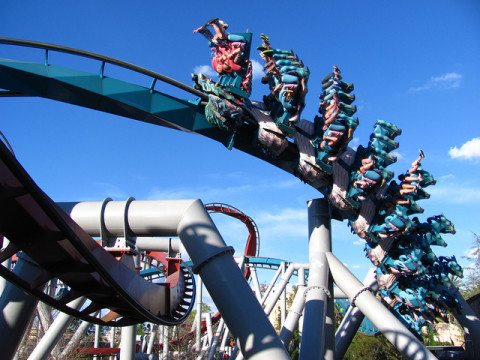 During the time that an investigation was being done on the incidents, Universal suspended dueling operations and only ran the 2-tracked roller coaster with one train riding along the circuit at a time.

It should be noted that no injuries have been reported on the ride since that time.

Of course, I think the rally call to bring back the dueling aspect of the Dragon Challenge ride is virtually unanimous from roller coaster enthusiasts. I’ve ridden Dragon Challenge — both during the time the ride dueled and after dueling had ceased.

Certainly, a huge visual thrill is created by the effect of several near-misses during the course of the ride when trains are running on both roller coaster tracks simultaneously.

So, if Universal Orlando is installing metal detectors on 3 of its largest rides, doesn’t this look like a gesture toward further ensuring the safety of roller coaster riders (and guests on the ground)?

I certainly think so.

The installation of metal detectors at the park may even help reintroduce dueling trains Dragon Challenge again, but that’s not been confirmed or officially mentioned by Universal Orlando.

Why Are Some Roller Coaster Riders Upset About Metal Detectors?

You can’t please all of the people all of the time, and this has been the situation over at Universal Orlando since the installation of the metal detectors at the headlining roller coasters. 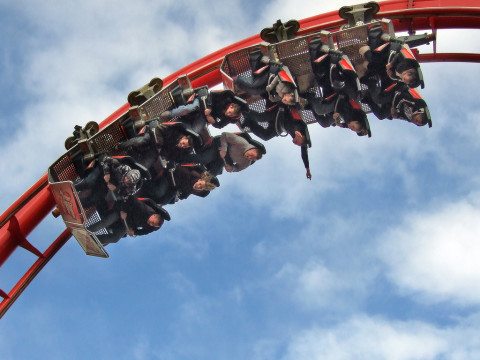 While many people are glad to see the park installing metal detectors on some of its rides in the name of guest safety, others are less than happy about the change.

Why do some people like to use their phones while waiting for — or riding on — roller coasters?

Phones, along with loose change, keys, and other pocket goodies can cause serious injury to riders or those on the ground should the items fly away from the rider during the course of the ride experience.

I used to work Lost & Found at a theme park. Believe me, I’ve seen more than my fair share of broken, nearly obliterated cell phones, change, wallets, keys, and so much more being turned in by security personnel from those rides. I’ve also ridden on roller coasters where guests near me conceal their cell phones while boarding the ride and then sneak their phones out the moment the train has left the loading station so they can snatch photos or video of the ride. I always pray during those times that the phone doesn’t fly away from the guest and hit me or other people during the ride.

The worst thing going on with cell phones and roller coasters these days is the use of selfie sticks, more appropriately called “narcisticks.”

While it might upset some of my fellow roller coaster enthusiasts for me to say this, I’ll say it anyway – leave the taking of POV videos to the professionals who have permission to use their cameras on a ride and can properly secure their video footage equipment during the shooting.

And what about those long waits in line that everyone’s saying will cause boredom among the phoneless riders?

I ask you this — what did we do before the cell phone era when we had to wait in those 120-minute lines? I don’t know about everyone else, but I used to talk with the people in my group or those around me.

For the record, I was born in the early 1980s, which means I’m a Millennial according to most demographers – one of the “young people,” that is. So, this is not the ranting of someone who’s bashing the younger generation. I’m part of the young generation. I’m just bashing the concept of any rider of any age boarding a roller coaster while carrying a cell phone.

How To Keep Your Cell Phone Safe While Riding Coasters

Universal Orlando offers free lockers near all of their major rides.

So, if you’re not visiting the park with a non-rider who will gladly hold cell phones and purses while you and the rest of your group scream your lungs out on roller coasters, there’s a free and convenient option for stowing away your items while riding the rides.

If you worry about medical equipment (such as insulin pumps) setting off the metal detector or not being allowed on the ride, rest assured most medical devices are still allowed on rides.

So, too, are wallets — so long as they are concealed in zippered or buttoned pockets. I think that’s the question most roller coaster enthusiasts are asking right now. As of this writing, there have been no other official announcements from any of the major parks.

UPDATE: Disney World has banned selfie sticks at all of its parks.

Perhaps other parks will adopt use of metal detectors on their roller coasters should the technique prove to be keeping guests at Universal Orlando safer without significantly slowing down the ride queuing or boarding processes.

Of course, like many initiatives at theme parks, the implementation of more metal detectors at Universal Orlando or elsewhere may happen without prior notice.

What does all this really boil down to? Let’s keep following the rules!

Theme parks aren’t out to intentionally make our vacations harder for us. However, they want their guests to remain safe and sometimes that may require us to do things that some of people don’t want to do — like pass through a metal detector.

I’ll gladly spend an extra 5 or 10 minutes waiting for the guests ahead of me in the ride queue to pass through a metal detector if it means all of us will have a safer, more enjoyable roller coaster riding experience.

Let’s embrace the new rules, leave our phones and pocket change behind, and have fun on our favorite roller coasters.

Must read: 10 Roller Coaster Safety Tips That Could Save Your Life

10 Best Beaches In The U.S. That Should Be On Your Bucket List